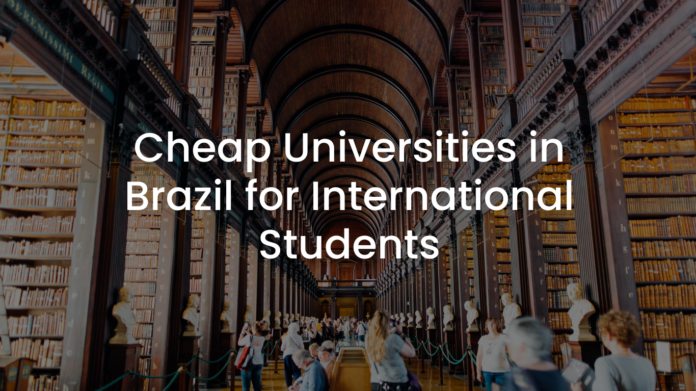 Brazil is one of the biggest nations in South America and is primarily known for the Christ the Redeemer statue and the Ipanema beach. This is more of a famous tourist destination; it has now become a prime spot for international students. After all, it’s home to many affordable yet outstanding universities. In this article, we will be looking at the cheap universities in Brazil for international students.

Free and Cheap Universities in Brazil

The University of Sao Paulo is located at the heart of Brazil’sBrazil’s most prosperous state. The University was establish in 1934; it traces its root back to the Sao Paulo Law School, established in 1827.

In Brazil, the USP is recognize as the most extensive University, and this University is also the most prestigious one in the country and the entire Latin American region. As such, USP is identify as one of the finest higher education institutions worldwide.

USP offers a total of 247 undergraduate degrees and 239 post-graduate programs. The University has 5 hospitals, as well as 24 museums.

So, the USP has four campuses in the city and 7 more in nearby municipalities. With the funding from the government, USP is one of the many free public universities in Brazil for both local and international students.

The University was establish in 1962, and Unicamp has become one of the best institutions in the country. This University is consider one of the finest ”young” universities and is the second-ranked school in Brazil.

Unicamp’s main campus is 350-acre is situated in Barao Geraldo. It has become the spacious home of 10 institutes and 14 schools for its large size.

Unicamp also has a campus in Limeira that provides courses in Engineering, Technology, and Applied Science. On the Piracicaba site, the School of Odontology can be found.

However, with its various campuses, the University provides 70 undergraduate degrees and 153 post-graduate programs.

The University, also known as the Federal University of Minas Gerais UFMG, is the largest federal educational institution in the country.UFMG is situated in the city of Belo Horizonte, which is the sixth-largest metropolis in Brazil. Most of the courses are teach on the main campus of UFMG; there are other offerings on the smaller campuses of Montes Claros and Tiradentes.

A total of 75 undergraduates degree, 66 Master’sMaster’s programs, and 57 Ph.D. programs are offer by UFMG. UFMG is tuition-free for both local and international students, like all the other public universities in Brazil.

UFMG has been recognize as the third-best University in Brazil for its high research output. This University is best for its arts and humanities courses; UFMG is rank the eighth-best institution in all of Latin America.

This University is a public educational institution based in Porto Alegre, Brazil. The roots trace back to the Escola de Farmacia e Quimica, established in 1895. In 1934, this University became the Universidade de Port Alegre before it was federalized in 1950.

As the largest University in the Rio Grande do Sul, UFRGS is home to 29 schools, faculties, and institutes. The University is disperse in different locations, including the Downtown Campus, the Health Sciences Campus, the Olympic Campus, and the Vale Campus.

So, in Brazil, the UUFGRS is consider the fourth-best University and the eleventh-best institution in Latin America. This University is famous mainly for its clinical and health degree offerings.

As with many public universities in Brazil, UFRGS offers free tuition to admitted international students.

The UFSC is a public institution situated in Florianopolis, south of Brazil. The university is consider the fifth-best university in the country and the 12th best in the Latin American region.

So, in 1917 the UFSC forerunner was the Polytechnic Institute of Florianopolis establish. This eventually became the first University in 1960, before it was federalized in 1968.

The University offers 119 undergraduate, 82 Master’sMaster’s, and 55 Doctorate programs. UFSC is well-known for its health and medical degrees and arts and humanities courses.

UFSC provides free tuition to local and international students, comprising 2% of the total population. The competition is brutal, though, as the University only has an acceptance rate of 15%.

The University of Brasilia is a top federal educational institution situated in the capital. This University was establish in 1962; it is rank 8th out of all universities.

The University offers 61 undergraduate, 49 master’s, and 27 doctorate degrees, and UnB offers free tuition. Also, it has become widely popular for its law, political science, economics, mathematics, and anthropology studies. So, the admission process is competitive, with the school accepting 2,000 out of 25,000 applicants every year.

UNESP is one of the best institutions for higher education; it has the distinction of being the only member of the Compostela Group of Universities.

It has 23 campuses that play home to more than 47,000 students. The students are engross in the many offering of the University, which cover 171 undergraduate and 62 post-graduate degrees.

So, the university has started an International Courses program to invite more international students. The course covers the fields of Dentistry, Linguistics, and Literature.

So, I hope this article on cheap universities in Brazil will help know the universities with free tuition. If you have any doubt, you can ask through comments.