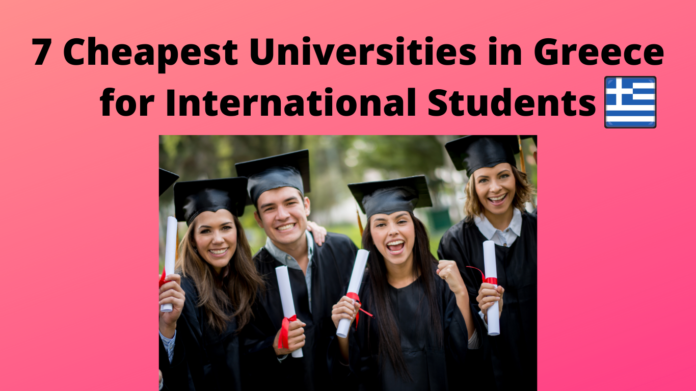 Greece is one of the oldest and historically significant countries in the world. This country lies on the Aegean Sea in Southeast Europe and comprises many islands that are one of the top tourist attractions in Europe and beyond. There have been many setbacks in recent years, and Greece is slowly on its way to recovery and remains a crucial country in politics and trade. Let’s lookmat some of the  cheapest universities in Greece.

Because of its beautiful scenery, beaches, weather, and advanced urban areas like Athens and Thessaloniki, it also attracts many international students. In Greece, tuition fees are not necessarily cheap; living costs are significantly lower than in other parts of Europe, especially other EU member states. In this post, we will be listing affordable universities that you can find in Greece.

The University of Crete is located on the beautiful island of Crete, with offices in both Rethymnon and Heraklion. The institution is one of Greece’s most highly regards higher education institutions and has a pretty large number of students of around 16,000 students, many of whom come from outside Greece. With the tuition fees starting from 0 Euros, the University of Crete is the cheapest University in Greece for international students.

So, the University of Crete offers 16 main undergraduate courses and 30 master’s courses across its departments. This University is relatively young, establish in the late 70s, and is currently rank within the top 70 universities more youthful than 50 years. Despite being young, the University of Crete is already a staple within many EU organizations and student exchange programs, which brings a lot of international students to the beautiful island of Crete.

In Greece, the University of Thessaloniki is the sixth-oldest University and one of the top-ranked universities. It is located in Thessaloniki, the second-largest city in the country. On the bases of campus size, Aristotle University is the largest in the Balkans. It has students around 40,000, including many international ones, who have the option to study in one of six foreign languages: English, French, German and Italian. However, various programs are carry out in Greek.

So, this affordable University in Greece consists of 11 faculties and 36 departments, which means that there is no shortage of options to choose from when selecting a study field. There are also many world-class facilities like libraries, sports centers, and more, which provide many extracurricular activities for the students.

It also has its research center founded in 1989, which significantly contributes to various research efforts. The University is part of many cooperation agreements, including the Erasmus program, which brings a large number of exchange students who have a background or interest in business and economics.

5. National and Kapodistrian University of Athens

So, the University consists of 9 faculties, which offer courses in nearly all areas of study, including a few programs in English that are particularly popular for international students.

The University accepted its first student in1999; the Hellenic Open University in Patras is one of Greece’s youngest universities. And the only one that provides both open and distance learning opportunities for students in all three levels, including bachelor’s, master’s, and doctorate. The University was formed with the growing demand for new forms of education and placed a very high emphasis on innovation and research.

So, the University has four schools: Social Science, Applied Arts, Humanities, and Technology. Because of its long-distance capabilities, this cheap University in Greece is attend by over 47,000 students worldwide, making it one of the largest in Greece. Despite many students, admission is not guaranteed, as only 1 of 10 students who apply get admit into the school. This University also has a meager graduation rate which hovers around 10%.

The University was establish in 2005 and is among the youngest universities in Greece and the first. And only Greek University where all programs are exclusively taught in English. It is situated in Thessaloniki, and since 2019, it has been academically divided into nine schools. And 33 departments spread across Thessaloniki and other cities like Drama, Katerini, Kavala, and others. International Hellenic University is a project in cooperation between the EU and the Greek government.

So, I hope this article on the cheap universities in Greece was helpful to you. If you have any doubt, then comment to us.