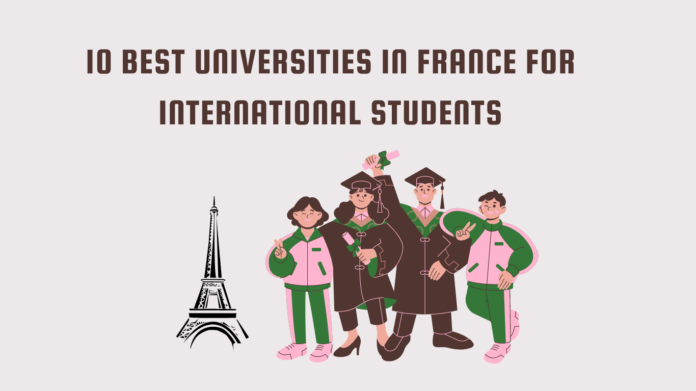 Are you planning to study in France? But they don’t know the cost of living, University to study, and more. Don’t worry; this post on the best Universities in France will help you choose the best for you. Stay till the end of the article.

France is geographically diverse in Western Europe and home to beautiful historical sites. The country has a long history filled with artistic and scientific actions. France is defined by its unique culture and influenced the world with its cuisine, fashion, and literature.

Paris Science et Lettres University is one of the best universities in France for international students. This institute was started by merging the five institutions like a regular school, an engineering institute, and an observatory. The University has grown significantly into 11 different schools across broad academic disciplines like economics, physical science, life science, humanities, creative arts, etc. PSL ranks among the highest in Mathematics, Physics, and ecology for some particular subjects.

Ecole Polytechnique was established in 1794 as military under Napoleon and is one of France’s best universities for international students. It has been a driving force in the Age of Enlightenment and the Industrial Revolution in France. Currently, it is one of the most selective universities in France, known as grandes Ecoles. The military part has narrowed with time; still, the prestigious institution continued with a high reputation in science, technology, and engineering teaching and research.

Ecole Polytechnique is a multidisciplinary institution. The institute engages the Sci-Tech fields with humanities and social science to promote responsible scientific and economic development. Its entrepreneurial spirit and international outlook offer broad opportunities for students worldwide.

This University was established as an official public research university in 2018 as a merger of several French institutions. The past of this University is a college of Sorbonne in 1201 as an institution for disadvantaged schoolchildren. Currently, the University holds its name and legacy as a creator of futures by providing high-quality education and research to international students. They are organized into three faculties: Humanities, Science and Engineering, and Medicine.

The bachelor’s and doctoral degrees in Sorbonne University are famous in France and worldwide, and the university partners with equally prestigious universities like King’s College London and McGill University. The University is renowned for its extensive scientific collections displaying minerals, wax anatomical items, neurology collections, etc.

The University of Paris is an inclusive university with a long-lasting reputation in philosophy and theology. This University is one of the oldest higher education institutions in France. Today, this top University in France provides innovative courses in various fields, including Science & Technology, Medicine, Social Sciences, Arts, Humanities & Languages.

The mixture of history and modernity is evident in the University’s multidisciplinary approach to teaching and research. So, it extends around 14 campuses in Paris and maintains an international outlook with various global partnerships.

This University is one of France’s best universities for international students and is part of the Paris-Saclay academic and business cluster mainly for training and research. The University contains five facilities: Medicine, Science, Pharmacy, Sports Sciences, Law, and Economics & Management. In subject rankings, the grande Ecole ranked first globally in Mathematics, followed by Physics in the 9th place, and it is among the top 25 in Agriculture and Medicine.

The Paris-Saclay University is a crucial player in science and technology because it has over 300 research units governed by its doctoral schools. Some of the research focuses are on Planetary science, electrical engineering, and communication sciences. At the master’s and doctorate levels, the University highlights students from different backgrounds and nationalities.

The University is a public university dedicate to engineering research. It is nickname the MIT of France; Télécom Paris offers multidisciplinary and specialized engineering training at the bachelor’s and master’s levels. This top University in France organizes its teaching into four departments: Computer Science and Networking, Electronics and Communication, Signal and Image Processing, and Economics and Social Science. The research at this University includes user experience design, artificial intelligence, and data processing improvements.

Telecom also has a selective admission process like other French grandes Ecoles, and over one-third of them are international students. The University has undergone various name changes, but its long-lasting dedication to productive networking and technology remains.

The University was establish in 1747 to train engineering officials in providing efficient control over the ongoing infrastructure works in the state. Today, this prestigious University has expanded its department from civil engineering to computer science, mechanics, applied mathematics, economics, urban studies, etc. Also, it newly launched a design school that focuses on innovation and start-ups.

ENPC is one of the best universities in France for international students by providing world-class teaching facilities and research laboratories. The ENPC has also maintained a close collaboration with French and international universities such as Berkeley and Georgia Tech. So, the University has double-degree agreements with various of these institutions.

Several students in ENS de Lyon work as public servants after graduation in exchange for financial support during their studies. As well as its civil responsibilities, the university hosts start-up business innovations, specifically in computer sciences and medical technology.

UM is one of the oldest universities in France and the world. The University of Montpellier is a top French university for international students was establish in 1220 as a faculty of arts. The school of medicine was later founded by the scholar who train in Spanish medical schools. Since then, UM has grown to accommodate allied disciplines such as humanities, law, science, and technology. At the time of the French revolution, Montpellier was split into three institutions, but two of them reunite to form the University as it is known today.

So, UM has about 50,000 students, including over 7000 coming from countries worldwide. The University’s broad disciplines make a tremendous academic experience for all students, and UM is particularly notable in law and ecology in terms of subject ranking.

This University is one of the top French universities for international students; it was establish in 2012 by a merger of three universities in Provence, Southern France. After that, its total student population of 80,000 made it the largest University in the French-speaking world. More than 10,000 are international students. The University has an extensive offering of disciplines, like Law & Political Science, Economics & Management, Literature & Human Science, Health, and Science & Technology.

AMU excels in social and natural science and has naturally gained an international reputation in this field. It is also specified in French linguistics and literature study and the standard subject areas. With long-lasting academic excellence, AMU claims various Nobel Prize and Pulitzer Prize laureates, government leaders, and ambassadors.

So, I hope that this article on the best universities in France for international students was helpful to you. You can also find more information on different European universities.